OK, folks...the moment you've been waiting for is... MORE

Who knew one of my favorite places to swim as a kid was also a fantastic Northern Pike fishery?

I had the opportunity to fish with two friends for a day last weekend. We planned for an incredibly productive day, as one always should when preparing to fish. We did indeed have a great day, although I don't think it was half as good as we had anticipated. Turns out it was a windy day with a bit of weather moving in, cooler than we figured, and with an East wind coming up the big St. Lawrence River right into our faces. Considering the strikes against us, I think catch-wise we did pretty well. And anyway, not one of the three of us in our party who were out that day are dedicated catchers, in spite of being dedicated fishers.
Speaking of our three-man party, the other two guys I fished with were my friend and mentor, Jim Ingram, with whom I have fished many times now, and Don Meissner. Jim is responsible for me becoming a fly fisherman. He introduced me to fly fishing a couple of years ago while we were on our trip to Montana. Don Meissner has become a friend of mine within the last year or so, since last summer when the three of us and some other friends shared a fantastic fishing trip to Quebec at La Reserve Beauchene.
Many of you will recall that Don hosted the long-running fishing show on WPBS TV, "Streamside". I kind of grew up on Don's image and voice, myself. I enjoyed many, many mornings watching Don fish all over the place, seeing new places and meeting new people as he went. I always appreciated the fact that Don shared fishing with so many people, including me. Of course I never imagined that one day I would meet and fish with him.
Don was kind enough to show us around some of his favorite spots on the St. Lawrence. I fished the river quite a bit when I was younger, and also during the past several years. So I thought I knew every place there was to fish. Of course Don, having many, many more hours, nay years, of fishing under his belt than I, knew several good spots I never even thought of.
Jim brought in the first fish of the day on this season opener. You'll note in the photo here that he is holding up his index finger to signify a "number one". He was quite pleased. i don't blame him - he brought this one in within a few minutes of first wading in. (Pardon the photo quality, it seems I only had my Treo handy for taking pictures!) 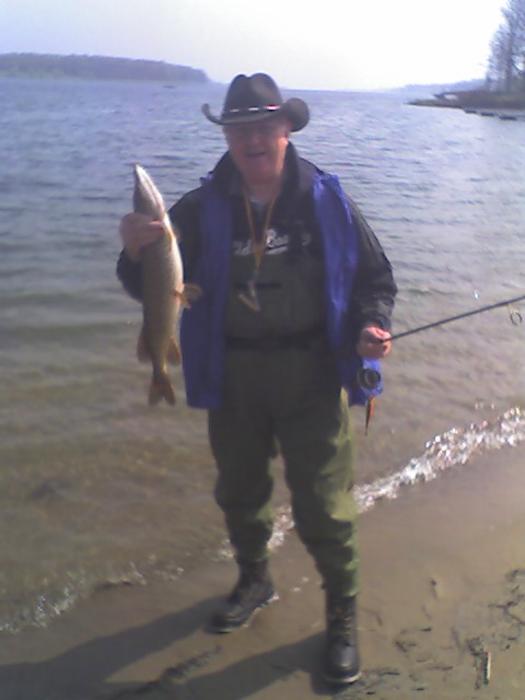 Don has a kind of reputation for "first cast, first fish". I learned this last year in Quebec when I first met him. As we travelled from lake to lake, he would invariably toss his line in for the first time at a given location and immediately hook a big one. This happened repeatedly, and from what I'm told by the other folks with us who have fished with Don for many years, this weren't nothin' new. If he was anyone else, we'd have probably hissed and groaned with envy. But hey, he's Don Meissner! When Don effortlessly pulls in a great fish on his first cast out, it's almost like nature. It's simply meant to be that way, and I treasure the opportunity to watch a legend pull in yet another lunker.
On this trip, this first day of the 2008 Northern Pike season on the St. Lawrence river, I watched Don Meissner hook that big one on his first cast again. However, this time it didn't come in. Don lost that one, and it turned out this was kind of the marker for the day. We lost at least as many as we caught on this trip. It was kind of an odd day that way, and even Don remarked that he felt the fish weren't really committed. We surmised that perhaps given the late ice-out and the cool weather we'd had recently, the Northern simply weren't yet ready to eat much. It seemed very much like the strikes were more about territory than sustenance. They were hitting hard, but then letting go almost immediately. We found this to be true at each spot we fished, and fished spots at least five miles apart from one another.
All in all though, it was really a fantastic day. As my first day fishing for 2008, I consider it a great start. I look forward to more fishing with Jim and Don very soon. I understand they've gone out again this past weekend (I was busy at home and couldn't make it) and caught dozens of big ones. I can't wait to see the photos (maybe some video, too?).