One more reason why we don't need public broadcasting?

Just finished reading this very brief post on the... MORE

BIG BANG BIG BOOM: Months of Work and Hundreds of Gallons of Paint

Here's my new favorite animated art (it takes a... MORE

Who knew one of my favorite places to swim as a... MORE 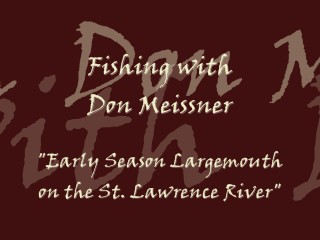 OK, folks...the moment you've been waiting for is here. The first in what we hope to be a long ongoing series of video produced with fishing legend Don Meissner (of PBS' Streamside fame) entitled, "Fishing with Don Meissner."

In this very first episode of "Fishing with Don Meissner," titled "Early Season Largemouth on the St. Lawrence River," Don talks about the behavior of fish in the cold water that remains after ice-out, where to find them, and how to fish them.

Don went out with my good friend Jim Ingram and with Will Clute of Mohawk Trails Guide Service in Hogansburg, NY, to fish the St. Lawrence River where it runs through the Akwesasne Reservation. I unfortunately couldn't make the trip, but from what I hear they had lots of big fish, from Largemouth Bass to Smallmouth Bass to Northern Pike and more.

Don talks about the benefits of fishing a suspending lure during this colder season, as it hangs while you play it, without dropping, even when you reel in slowly. In this manner, the more lethargic fish found during the early season will have time to become interested and chase after your lure.

You'll also note in this video that even Don Meissner can hook and lose big fish - just like the rest of us! Here it is, "Fishing with Don Meissner 1.1: Early Season Largemouth on the St. Lawrence River":